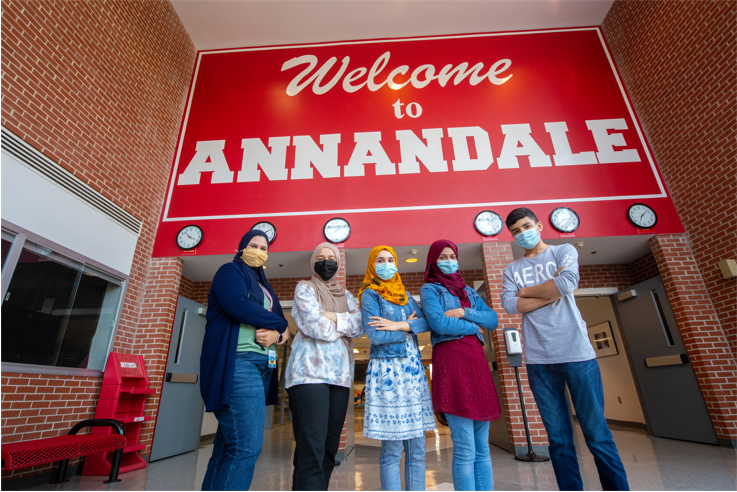 Afghanistan was thrown into the rubble after the U.S. military left the country. Taliban took control of their government, leaving the country in complete chaos. President Biden sought the safety and evacuation of Afghan Refugees and Allies and their families.

Afghanistan refugees were taken through Dulles Airport. Some of the Afghans stayed in Virginia, and children were enrolled in Fairfax County Public Schools. According to Annandale High School’s website, more than 80 students are enrolled in the school system.

“Parklawn Elementary School has enrolled at least 19 Afghan students over the past three weeks, more than any FCPS school, according to district data,” said the Office of Communications and Community Relations, through an Annandale High school article.

The refugees that came through the Dulles Airport were housed at Northern Virginia Community College temporarily. However, there were some people who decided to stay in Virginia permanently, according to Annandale High School’s website.

Sosan Barakzai is an Afghanistan refugee that arrived in Virginia in 2015, she is now a sophomore at Annandale High school.

“Everything is different about school here,” Barakzai said. “Some of it was quite shocking to me, but I never felt uncomfortable.”

A Fairfax County media outreach associate declined to comment on the situation since the students are trying their best to return to normal school schedule after a plethora of interviews since the beginning of the year, but it can be said that they are doing their best to make sure these students have all the support and help they need from the counseling department and beyond.

Principal of Parklawn Elementary School, Rebecca Forgy, said, “We have a strong support team,” adding that counselors, the Parklawn family liaison, psychologist, and a social worker gather at least every other week to discuss newcomer needs.

Coming to live in a completely different environment, especially in these circumstances is difficult, but the people who help make the transition easier and the ones who are remembered in the most fond way.

“There were teachers who called him sweetheart and checked in on him at home,” said Ahsanullah Luddin, a junior at Annandale High School.

He goes on to say there were many people and students who helped him adjust to the different American school standards. He said he had a neighbor that helped him with homework for multiple hours a day, students that showed him around the school, and teachers who tried to understand his circumstances.

There is quite a big difference between the normal Afghan teacher-student relationship, Luddin notes.

“Annandale, given our diversity, given our location, we seem to be a microcosm of anything that is happening in the world,” said Shawn Derose, Annandale High School principal.